Twitter
UK Oil & Gas Investments PLC is pleased to announce that the Company has today received a Competent Person's Report ("CPR") detailing the Hydrocarbons Initially in Place ("HIIP") and associated recoverable volumes expected within the fields, discoveries and exploration prospects of its nine UK onshore licence holdings. The CPR, prepared by Xodus Group Ltd ("Xodus"), focuses upon the Company's discovered conventional oil accumulations and is available to download from the UKOG website www.ukogplc.com.

"This CPR, the first evaluation of UKOG's entire conventional asset base, is an important company milestone and amply demonstrates the substantial growth created in the Company's four years as an Oil & Gas investing company. Furthermore, it demonstrates that the significant growth potential of our flagship Kimmeridge Limestone assets is solidly underpinned by UKOG's discovered oil resources lying within geologically simple and easy to develop conventional oil accumulations.

We now look forward to the forthcoming production testing campaign at Horse Hill, the first of a series of planned near continuous appraisal drilling and testing programmes designed to transform the CPR's recoverable resources into permanent production and reserves." 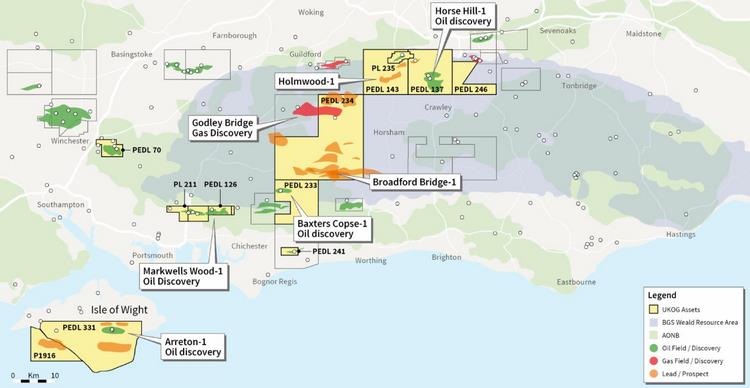 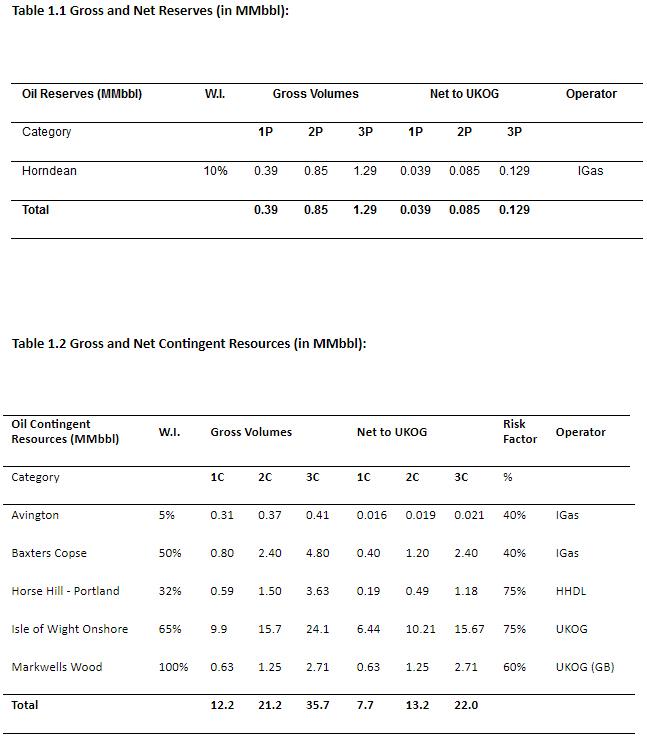 It should be noted that in the case of the porous permeable Portland reservoirs found at Horse Hill, Arreton and potentially at Holmwood, the CPR states that the implementation of secondary recovery by an early pressure maintenance scheme (i.e. produced water reinjection) could materially increase the recoverable volumes stated in the CPR. In the case of Horse Hill, the successful implementation of such a scheme is estimated by Xodus to lead to the recovery of a significant additional 8-14% of HIIP.

The CPR also discusses and references the potentially significant Kimmeridge Limestone Resources within the Horse Hill-1 and Broadford Bridge-1 oil discoveries, together with the wider Nutech and Schlumberger estimates of HIIP within UKOG's overall licences.

It should be noted that since Kimmeridge exploration and appraisal is still at an early stage, both Xodus and the Company consider the Kimmeridge assets are not yet at a sufficient level of definition where any meaningful Reserves or Resources can be assigned in accordance with Petroleum Resources Management System ("PRMS") reporting standards. However, the CPR states that the forthcoming Horse Hill-1 extended well test programme is expected to provide the necessary data to enable PRMS compliant Kimmeridge Limestone Reserve and Resource figures to be estimated at Horse Hill and by analogy for the wider Kimmeridge play. Given a positive Kimmeridge test outcome at Horse Hill, a further Kimmeridge CPR is planned to be undertaken in due course.

No resource estimates for the potentially significant eastwards extension of the Godley Bridge-1 Portland gas discovery into PEDL234 are included in the CPR. The Company believes that it is more pragmatic to wait until after the results of the Company's planned 2019 appraisal well and test to make such a determination.

The Company is currently considering whether to seek to change its current investing company status via a re-admission to AIM as an operating company. Consequently, the CPR was compiled as part of the necessary preparations for such an event. Any such re-admission and change of trading status would be conditional on the publication of a re-admission document and shareholder consent to cease as an investment company. Further detail will be provided when the Company has finalised its future corporate growth strategy and plans.