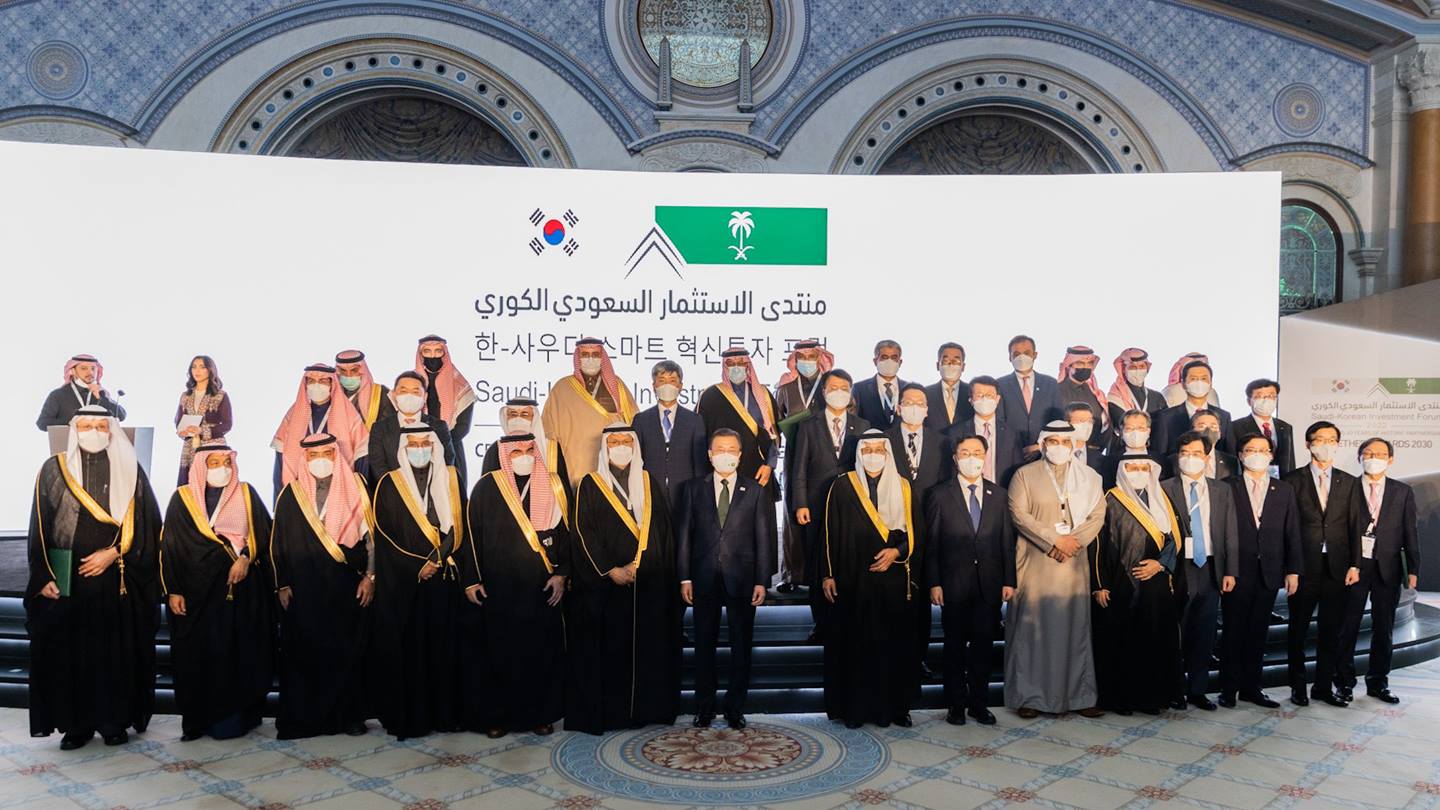 The Saudi Arabian Oil Company (“Aramco” or “the Company”) today announced the signing of one agreement and nine Memoranda of Understanding (MoUs) with leading Korean entities, which aim to advance its downstream strategy and support development of low-carbon energy solutions, while creating new financing options for the Company.

The agreements were announced on the sidelines of a meeting between HRH Prince Mohammed bin Salman bin Abdulaziz Al Saud, Crown Prince, Deputy Prime Minister and Minister of Defense, and the President of the Republic of Korea, H.E. Moon Jae-in.

The signings took place at the Saudi-Korean Investment Forum in Riyadh, an event hosted by Saudi Arabia’s Ministry of Investment which was also attended by the President of the Republic of Korea, Aramco President & CEO Amin H. Nasser, and senior corporate executives from both countries.

Local manufacturing of industrial equipment
Aramco signed an agreement with Korea’s Doosan Heavy Industries & Construction Company and the Saudi Arabian Industrial Investments Company, Dussur. This partnership aims to establish a casting and forging facility that could supply the Kingdom’s manufacturers with industrial and process equipment such as valves, pumps, compressors, wellheads, flanges, heat exchangers, and gas and wind turbines, with the objective to enhance local content. The planned joint venture has a production target of 60,000 tons per year, primarily from sand-casting and open-die forging processes, complemented by machining capabilities. It also has potential to supply original equipment manufacturers (OEMs) in the rig, drilling, maritime and engine fields, with the possibility of expanding to the wider GCC market.

Low-carbon energy solutions
The agreements also include MoUs with Korean energy companies KEPCO, S-Oil, POSCO, Hyundai Oilbank, H2Korea and Lotte Chemical to explore potential collaboration in the supply, transportation, utilization and certification of hydrogen and ammonia. The companies also plan to study the feasibility of converting exported ammonia into hydrogen – a process known as ammonia back-cracking. This represents a first step towards a potential large-scale production facility for hydrogen and ammonia in Saudi Arabia, which would also include a Carbon Capture and Storage (CCS) facility.

Finance solutions
The Company also signed a Heads of Terms agreement with the Export-Import Bank of Korea (K-EXIM) to explore strategic financing solutions in support of the Company’s business and investment activities involving Korean companies.

Amin H. Nasser, Aramco President and CEO, said: “Our partnership with Korean companies spans decades and today we are pleased to broaden these ties in technology, manufacturing and finance. In addition to focusing on cutting-edge development in a range of areas, they also support our shared goal of finding climate solutions and lowering greenhouse gas emissions through the development of low-carbon hydrogen and ammonia production, as well as carbon capture and storage. Together, these initiatives with Korea’s industry leaders will further enhance our downstream expansion and integration strategy.”

The agreements seek to deepen collaboration between Aramco and leading Korean companies to unlock new opportunities in the fields of advanced technology, manufacturing and finance, illustrating Aramco’s commitment to driving development through global partnerships.

The following agreement in the field of construction was signed:

The following MoUs in the field of technology were signed:

The following MoUs in the field of finance and investments were signed: