Petrobras: Exercise of preferential right in the second and third bidding rounds for areas under production sharing regime

Petrobras informs that it submitted today to the National Energy Policy Council (CNPE) its first formal statement in connection to the preferential right for the second and third bidding rounds for exploration blocks under the production sharing regime, pursuant to Law 12.351/2010 and Federal Decree 9.041/2017.

Considering the parameters disclosed in CNPE resolutions no. 2 and no. 9, of 2017, after technical analysis, approval by the Executive Board and deliberation within the Board of Directors, Petrobras decided to exercise the preferential right in the following areas and in the minimum percentage of 30% in each area, focusing on maximizing the value of its portfolio:

The value corresponding to the signature bonus to be paid by Petrobras, considering that auction results confirm the minimum stake indicated above in each block, is R$ 810 million. New priorities were stablished on the planning to provide for financial resources for the acquisition of these new exploratory areas, without impact on metrics during the period of the 2017-2021 Business and Management Plan.

Petrobras' position in these bids is aligned to the foundations of the Strategic Plan, which provides for the sustainability of oil and gas production, with strengthening of the exploratory portfolio and operations in partnerships.

The flowchart below represents the possible Petrobras’ scenarios for exercising the preferential right, pursuant to Decree no. 9,047 of 5/2/2017: 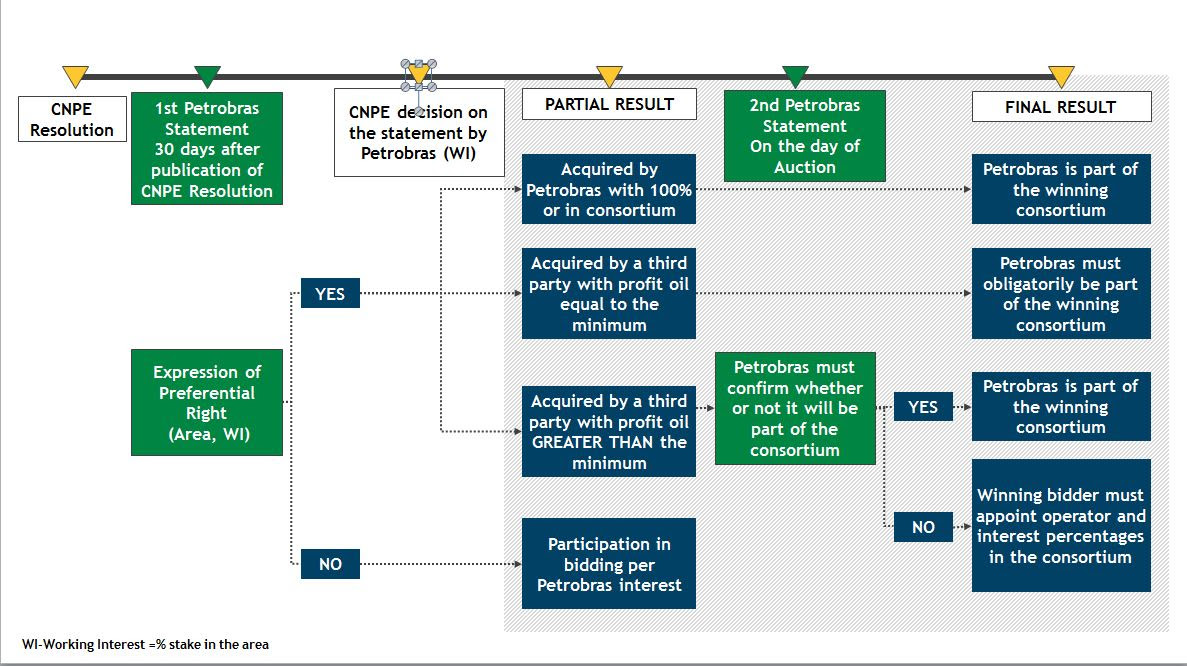 It is important to highlight that Petrobras may expand the percentage of 30% indicated for the areas where it is exercising its preferential rights, forming consortiums to participate in the bids.

In relation to blocks in which Petrobras has not exercised its preferential rights, the company may participate on equal terms with other bidders, whether to act as operator or non-operator.

With the completion of the auctions, expected to occur in 2017, Petrobras will timely communicate the results of its participation to the market, in compliance with current legislation.